We talked about “environmental illiteracy” in Europe and how it can be eliminated so that it is not reproduced from generation to generation with the Commissioner for the Environment, Oceans and Fisheries, Virginius Sinkevitsus, in an online dialogue on “The European Green Agreement, our environment and our seas”.

All For Blue participated in the debate organized by the European Commission and was broadcast live, along with other Greek citizens. Our questions were mainly about biodiversity, the oceans, plastics and the circular economy. In fact, Katerina Kylertzi, who represented the Organization at the event, asked the Commissioner about the environmental education and what the EU intends to do to strengthen it.

“As a mother of three children, I am very worried about their education in whatever has to do with climate change and especially its effects on the lives of all of us” was Katerina’s question. She added: “I wonder why this preparation of children has not been introduced in basic education and while I am aware of the difficulty of the project, at the same time I realize that is a duty of our generation to equip the next ones with skills such as cultivating the land and building flood defenses on their own. Do you agree on this need Commissioner and do you know if there is a similar planning from Europe?” 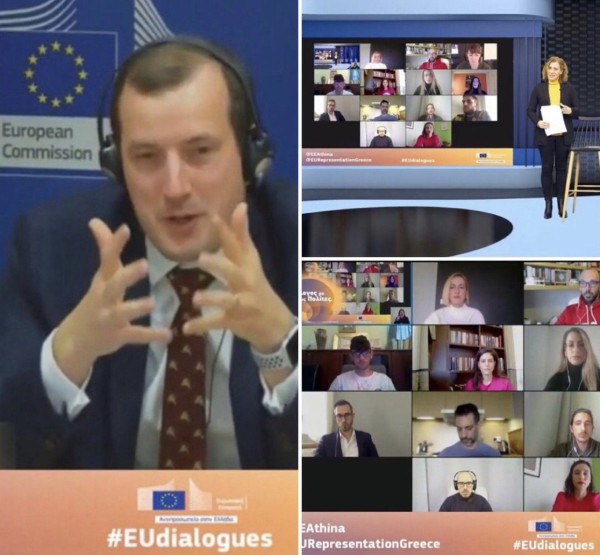 According to Mr. Sinkevitsus, the EU takes steps to support the awareness of young people, not only in terms of information, but also skills. At the same time, a major EU initiative is under way on “environmental literacy” and what citizens need to know about what is positive and what is negative.

As the Commissioner said, the Commission’s proposal is to promote cooperation between European countries on education, the environment and sustainability.

“We have formed an alliance to promote the protection of the Oceans in cooperation with blue schools that develop relevant plans. The new green agreement is a call to everyone, to society, to our fellow citizens, to our teachers to learn what the limits of our planet are”, he said.

In this context, a broad consultation is being prepared next April, in order to emphasize the importance of the role of schools, alongside the new Erasmus plus that focuses on green education.

The dialogue was coordinated by ERT journalist, Katerina Christofilidou.