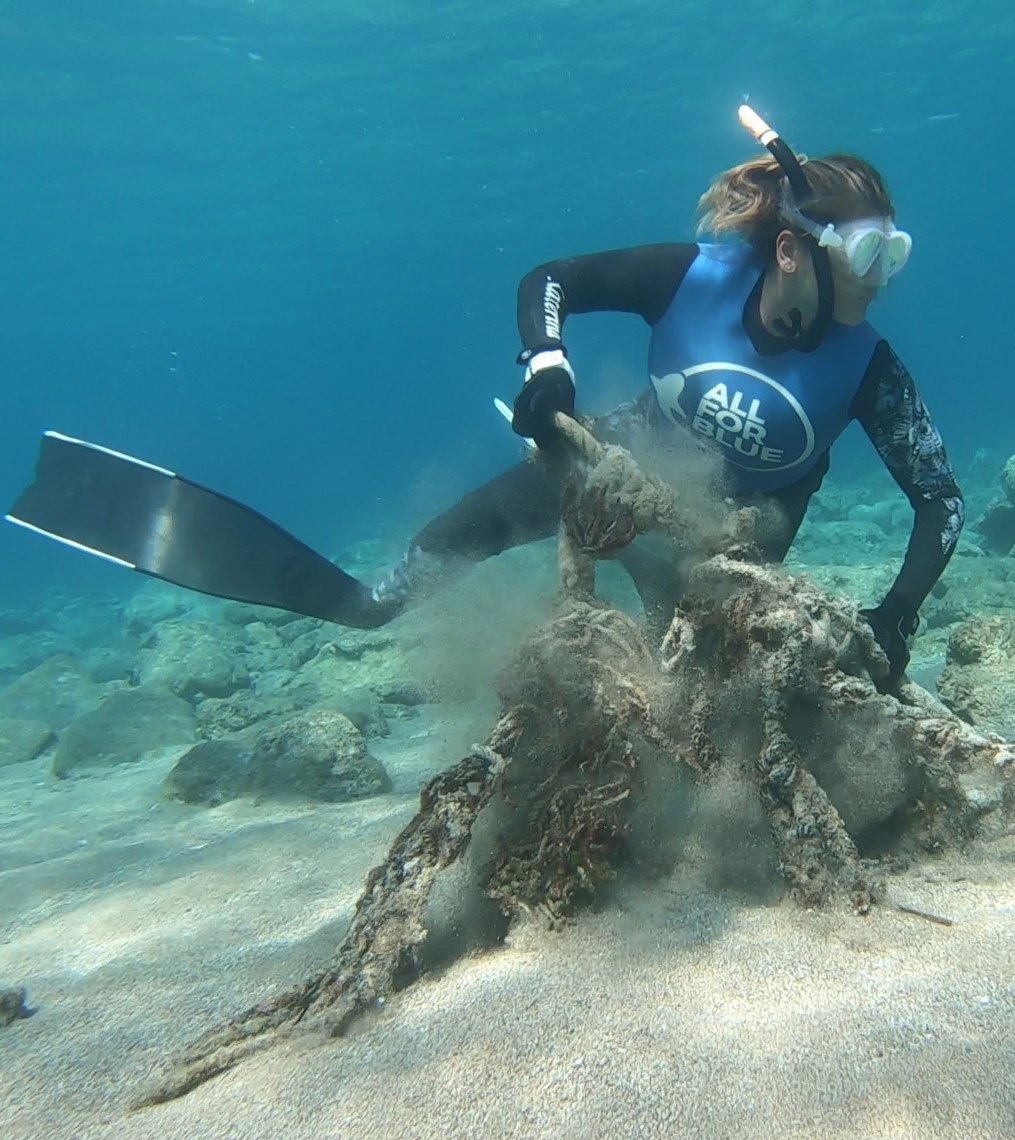 Katerina was also for many years a champion in spearfishing, donating all her catches to homeless people in Athens, since 2017 she has quit the sport and shoots only targets in the swimming pool.

Katerina is a last addition to our team as she comes from a different place. She holds an MSc in Investment Management from Cass Business School and having spent almost 15 years working in banking and finance she decided one day to see what’s going on outside her office’s window…

Being a mother of three it didn’t take her long to realise that the world in which she is bringing up her children has to change. This is pretty much how she integrated into All For Blue’s team.

How on earth was a supermarket trolley -with disposable plastic bags tied on it- found on the bottom of the sea at Vouliagmeni? Athena and I wondered as we couldn’t believe in our eyes when we saw the spectacle in one of our missions …

Born mermaid, being a technical swimmer with medals in freestyle diving, it didn’t take her long to become a key member of All For Blue and participate in all the underwater activities, motivating other certified divers to take part.

You may meet her at our exhibit booths, accompanied by her 11-year-old daughter Lydia, who is following in her mother’s footsteps in the water as she is already an accomplished technical swimmer.

As an employee of a pharmaceutical company, Athena explains to her colleagues and clients that just one little change in our habits is enough to save the environment and the marine ecosystem. And so, she has put stainless steel straws not only on the pharmacy shelves, but also in our lives.

Officially Spiros is a computer programmer – analyst. Through his 37-year career with boats, he has been fortunate to have traveled at least once to all the islands of Greece that are inhabited and to many that are not inhabited, from Othonous to Kastelorizo and from Lemnos to Gavdos and all the coast of Turkey, which is in the Mediterranean. He is also passionate about photography.

His friends call him the “Bedouin of the Sea” and his nickname is Navigable (Nafsiporos), as his boat is called. He spends most of his time with his wife on their sailing boat making the Aegean Tour. Spiros followed with his camera (October 2018 – April 2019) the #KeepAegeanBlue mission in the Dodecanese aiming at raising students’ awareness of the marine environment. Since then he has been with us on every mission.

When not scuba diving, he spends time with his other major love of cinema and film editing. Owner of Replay Media, he is the Deus ex machina every time we need to combine image with sound to tell our own sea stories to a new audience in order to attract volunteers.

Markos’ skills are a valuable tool for us, and in our work we have repeatedly relied on communication, education and, quite simply, how to explain who we are and what we do. Yes you got it right, he is the man behind every All For Blue video clips and behind every video of our Organization’s actions. A professional diver, scuba trainer and scuba trainers’ trainer, he is dressing the moments of his life with his favorite color: the blue of the sea.

Deeply environmentally aware, he has received similar stimuli since his childhood and transmitted them to his surroundings. He is a freelance diver and first aid trainer.

Swimming in calm blue waters in one of the most popular islands in the Aegean, was holding for her “secret meetings” with plastic items floating among bathers but also countless butts. This is how one summer Maria made the big decision to change what bothers her and is nothing more than a picture of tons of rubbish found on our seas and coasts.

Maria met Katerina, her mentor ever since, in one of the All For Blue actions. When they met again back in the water, she volunteered devoutly with All For Blue and began following us on all our winter cleaning missions. Since then, Maria has added yet another great love to her resume: protecting the sea.

Together with her beloved husband Panagiotis, they do not miss the opportunity to join forces with students and society and send their own message that everything is a matter of ecological consciousness and the replacement of everyday habits that pollute the planet.

Always ready with an answer and with charm, she does not hesitate to convey her ecological messages to her famous – with an influence on social media – clients, whom she takes care of during the summer as a make-up artist.

Till the age of 5, he was sleeping on an inflatable boat in his bedroom, and everyone understood the lifechanging relationship he would later have with the sea. The liquid element fascinates him throughout the course of his life and in combination with his fighting spirit, John is an integral part of our team. He is also the co-captain on the All For Blue boat and participates in all of our underwater missions as he holds a free diving license.

His contact with the sea is daily. Swimming is one of his favorite hobbies and the collection of trash he finds on the seabed and beaches was the driving force for his decision to integrate with All For Blue. He is an underwater shooting champion – a member of the National Team, and he used to be an athlete of water polo and technical swimming. He is a member of the Syros Inflatables Group and a friend of the Aegean Group. He has been involved in canoeing and kayaking in the local race in Syros, as well as in the karate technique.

Gerasimos has been involved in the tourism sector for 35 years and this summer he will become a diving instructor in his island. He participates in all our activities in the Cyclades, and is a big fan of the underwater cleaning ideology behind every dive: Dive for a Cause!

He is a musician as he plays the drums and the toumperleki and from times to times he also directs theatrical plays. As an example, we mention the play that was upheld to the unique Donoussa school in the framework of the Mission of Love co-organized by the Syros Inflatables Group.