When you envision a holiday in Greece your mind immediately travels to scenes of crystal-clear waters and sunshine. Yes, the “land of vitamin sea” is calling you. We recently sat down with Katerina Topouzoglou who is the founder of All for Blue. She runs this special non-profit organization that is dedicated to preserving the seas, ocean wildlife and more.

You have a passion for the underwater world from a young age. What triggered your decision to start the All for Blue project?

As far back as I recall, All for Blue was a part of me — initially it didn’t have a name (or a website and an international organization to support it). But it was in my mind during our summer holidays with my parents and sister, when we ended up collecting trash on every beach we visited. It was there every time I watched a documentary about sharks on TV and had the dream that one day I would have the chance to do something about these misunderstood, wonderful animals. It was there when I free dived for the first time; when I received my first diploma as a dive instructor; when I first traveled to win my first medal in an underwater target shooting world championship. 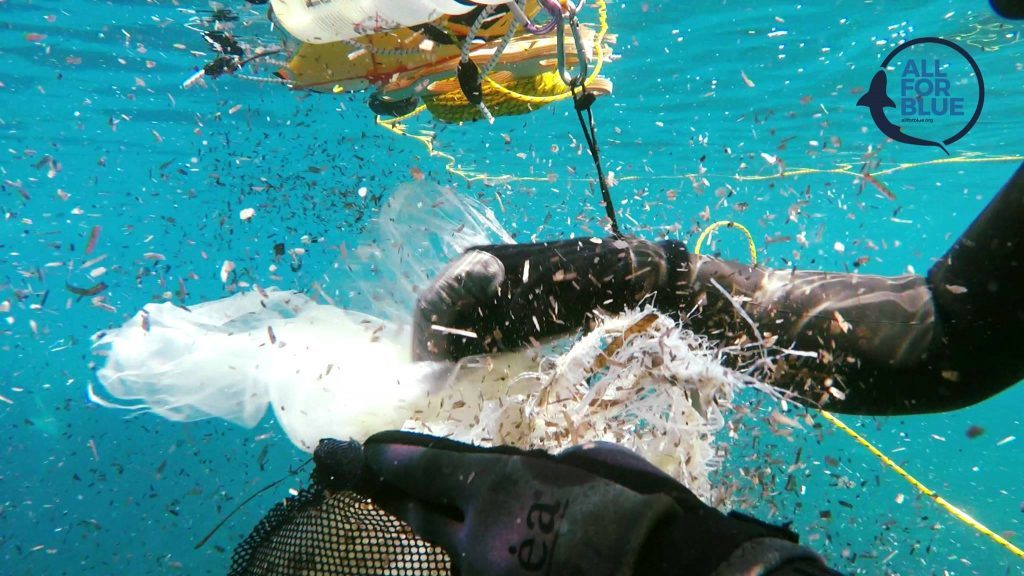 It was there in my every dive, in my every effort to leave each place I visited intact; only golden sand and crystal-clear waters. And it was there every time I met a child and tried to pass on my love for the sea and the underwater world, because I know that this child would be the one trying to make the world a better place tomorrow.

You have been living on Mykonos since 2000. How has the island changed over the years? With the rise of tourism on the island is it becoming more difficult to protect the marine environment?

People don’t know how important sharks are for the ecosystem. Unfortunately, they’re still all under the influence of the movie Jaws and most people think sharks are monsters.

Throughout the years, I’ve seen that only a minority truly care about the animals and the marine life. I’m hosting seminars in order to inform as many people as possible about these beautiful creatures. In Greece, we’re surrounded by sea and we know nothing about the creatures that are living in it. Cousteau used to say, “We protect what we love.” Therefore, I’m trying to make people understand the existence of sharks and to make people love them as I do.

On your website, you mention that there are 47 species of sharks in the Mediterranean Sea of which 36 live in Greece. How many species have you seen? Are there any specific ones which can be spotted on the shores of Mykonos?

I have been diving (free diving and scuba diving) with sharks for many years and participate in several research programs as a shark biologist in countries abroad where sharks are protected by law. In Greece, I was lucky to only once see a shark around Ro island. However, the poor sharks were so frightened by my presence that they immediately swam away into the deep. On Mykonos, I’ve only seen rays several times which are in the same family with sharks and also an endangered species.

I would love to see a Basking Shark one day. We call it proskinitis and it’s the second biggest fish (the biggest is Whale Shark) and in Iceland, people pay 350 euros for a four-hour session to snorkel with them. It is such a pity that we can’t take protect these beautiful and harmless giants of the ocean and get to know them better.

The bad thing in Greece is that fishermen catch any kind of sharks and instead of releasing them, they still keep them to sell them as another kind of fish. This situation is dangerous because it means that whoever eats fish (not me) doesn’t exactly know what kind of fish they are eating. Shark and rays consumption causes mercury poisoning because they eat a lot of trash and mercury levels are extremely high. The same stands for tuna and salmon, but the health dangers are even worse for sharks and rays.

Sharks are an endangered species. Only a few have been left in the Mediterranean and fishermen continue to kill them every day. Sharks eat fish. Humans are not on their menu. There are under nine fatal attacks per year because the victims die from bleeding.

They are known as “garbage disposals” because they are mainly fed with garbage and sick or weak fish, making them the official “cleaners” of the marine environment.

Sharks are vulnerable to overfishing, they are slow growing and slow to reproduce. That’s why this wonderful species is endangered, and of course because 100 millions of sharks are killed every year by humans.

In general, I have been diving with many different species in the ocean, Whale Sharks, Hammerheads, Tiger Sharks, Lemon Sharks, Bull Sharks, Nurse Sharks, Caribbean Sharks, Sand Tigers and many more.

Tell us about Shark Aware seminar and how can someone participate?

I really love education and enjoy everyone’s reaction after the seminar, because I turn their opinion about sharks upside down.

Once a lady approached me on the street and told me her son slept hugging the diploma I gave him at kindergarten.

In Santorini, the fishermen were extremely shocked after the seminar and they realized how vulnerable sharks are. Seminars are also for adults but all ages are allowed to attend.

The seminars, organized in cooperation with municipalities, schools, organizations, and private institutions, clubs, aim to:

• Teach children the importance of protecting our seas and oceans through fun activities.

• Change their minds about the misunderstood sharks and offer them new knowledge about the magical underwater world.

• Inspire them to take action.

I’m responsible for creating all of the material used for the seminars. All of the photos and videos are from my own archive (meaning they’re not indifferent or impersonal), and they’re definitely kid-friendly; no material is violent or scary.

As a shark biologist, freediving and scuba diving instructor, and the only Greek Shark Aware Instructor accepted by the universally recognized organization Project Aware, I have prepared a unique presentation. I’m also participating in worldwide shark research programs, along with various specialized scientists (biologists, oceanologists, etc.).

At the end of the seminar, which can be followed by a beach and underwater cleanup, each participant receives an internationally recognized participation certificate from Project AWARE.

You have recently organized a beach cleaning event on Mykonos. How often do you organize such events and how can someone participate?

The ocean is my home. Yes, I live and work on Mykonos. Yes, I’m Greek, but most of all I’m in love with the sea and it’s beauties. I wish I had gills. 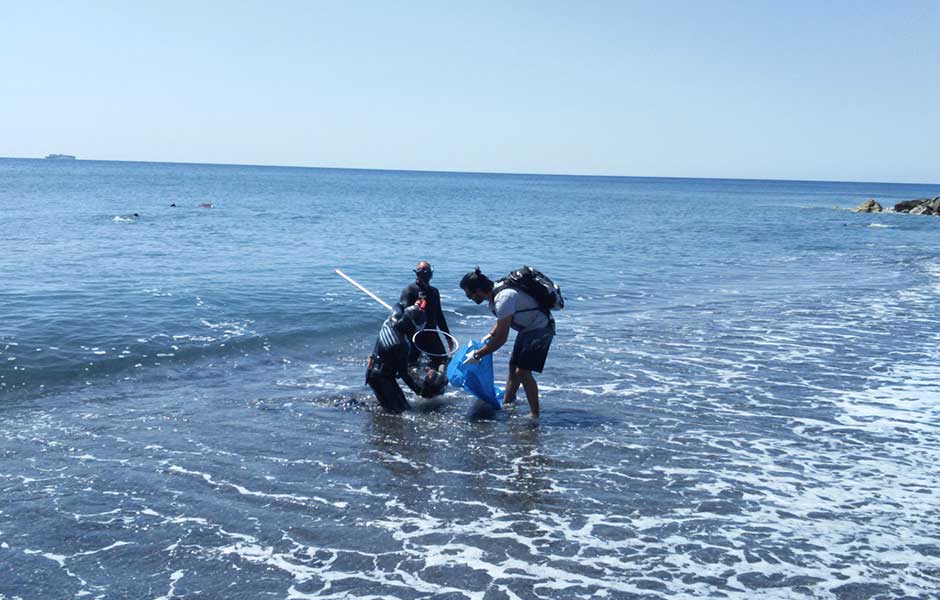 The clean-ups are organized in any place of the world because All for Blue is a worldwide organization.

Our actions are carried out in countries that invite us for seminars and clean up actions.

Being a traveler, I love teaching people in different areas of the planet to protect the ocean and the marine ecosystem. 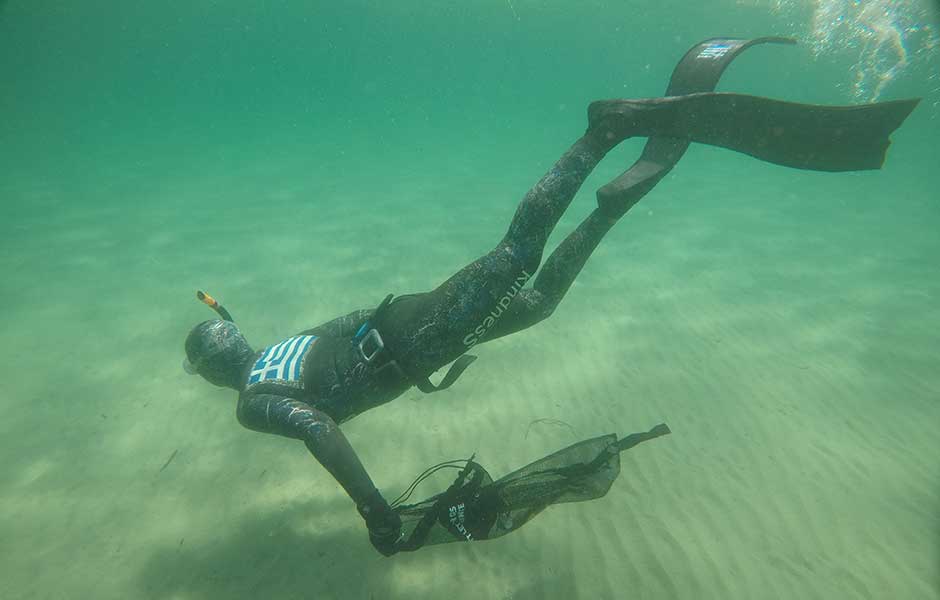 However, just because I’m also funding on my own all the projects for All for Blue through my personal business www.MykonosTopVillas.com as you can understand during the summer time I’m focused on my work on Mykonos.

I find time for a seminar or a clean-up but only for specific places. The main projects are implemented from September till June where I travel all over the world and do underwater and beach clean ups with volunteers and shark aware seminars.

We have collected more than 20 tons of trash (45.000pounds) and many more from the beaches.

This year All for Blue is planning actions in many places, some of them which: Cyprus, Los Angeles, San Diego, Guadalupe, Bahamas and South Africa.

Ways one can contribute:

• Become a member on our website www.AllForBlue.org to learn all the activities and participate

For scuba diving enthusiasts, where would you say is the best place to dive on Mykonos?

Definitely. The shipwreck of Kalafatis is a beautiful place for almost all levels of divers.

Congratulations on your initiative to educate children on the importance of protecting the environment. How do children react to such educational seminars?

When I visit a school, the first thing which I ask the kids is, what are sharks? So, they’re confused! My goal is when the seminar is finished, the answer will be sharks are our friends. Because they are. So far, I have awarded 4,889 diplomas and spent many hours educating first myself and then the others.

When you do visit Mykonos we hope that you will fall in love with its coast and beyond as much as we are. Should you wish to participate in the All Blue program, go ahead and sign up today. Thanks Katerina, for this detailed insight into your world and for sharing you passion for the sea.